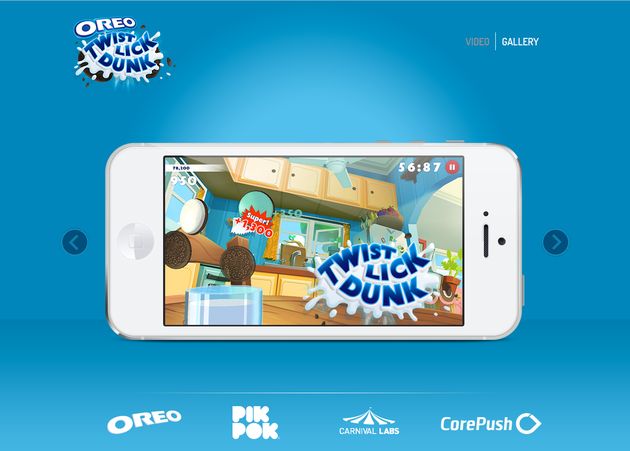 For those not in the know, there’s a video game app from the company that brings us the ever popular cookie treat, Oreos. This game has become so popular that the parent company is thinking of producing their own content instead of spending so much effort on advertising.

Mondelez, the manufacturer of Oreos and other food products, has decided to change their game plan due to the overwhelming success of the free app game, “Twist, Lick, Dunk”. This twist in events, pun intended, is something that has been proposed for years but major corporations hadn’t seen the value and equity in pursuing video games and apps as a means to reach the public. Oreo is a brand name that is so old that it’s part of the American tapestry. Not only have Americans enjoyed the cookies, but you’ll be hard pressed to find anywhere in the world where the tasty treats aren’t a staple of snacktime goodness.

In this instance, not only has the popularity of the brand name been used to good service, but the creative and entertaining use of video games and apps has shown that a familiar product or perhaps a new product can be promoted on a mass scale, satisfy old and new fans, and have them coming back begging for more.

PikPok, the developer of the game has seen numbers upwards of between 7-8 million downloads and billions of play sessions. With the surprise success of this game, plans are that a game based on ‘Sour Patch Kids’ will be developed. This is following the explosive trend of ‘content creation’. The internet is so massive and growing daily, that the wide variety of tastes calls for products developed for all the various countries, cultures, and more. Delving into this realm, Mondelez International hopes to partner with big media conglomerates like Twenty First Century Fox Inc as well as other print and online media.

We’ve all seen this explosion in content with streaming video companies like Netflix, Hulu, and YouTube. New television series and specials and movies are being produced all over the place and viewers are tuning in at record numbers. This is advertising gold and Mondelez International is seeing it first hand. Their wise attention and enthusiasm is going to break new ground and open new vistas that might upturn conventional advertising on its ear. If so, you will see every company and its brother following in Mondelez International’s footprints. This bodes well for one and all. It’s going to create new jobs, new revenue, uphold investors, entertain the populace and affect cultures ina positive way.

Now, if they teamed up with educational institutions to use such games to enlighten the public and especially youth, it would be a boon for humanity.

Mondelez International is by no means the first to produce content in this fashion. Other big shot corporations have been enjoying the windfall of such ventures for quite some time now. The old ways of advertising and content creation has been challenged of late, but now we have the mobile market which shows no sign of slowing down anytime soon. Not only that, but the mobile technologies take leaps and bounds on a monthly basis.

As this new direction in advertising and web content creation continues, we may see apps of such awesomeness that we can’t wait to get to the store and buy from the sponsors.

That’s the bottom line right there. To not only entertain the public but use the skills of advertising persuasion to get the public to head off to the store to buy more product. Considering Oreos are a consumable, this means repeat business! It’s just downright genius what they’ve pulled off and they’ve a large array of other products just as popular.

We’re looking at a new day where products and advertising can be made interactive and entertaining. Soon, everyone will be doing it but Mondelez and its partners will be far in the lead.

What’s this mean for today’s independent app developer? It means jobs and opportunities like never before. These companies are going to want to get as many products out as possible. This means they’ll be hunting for app developers. Considering the massive return on investment apps like this provide, it could turn out to be quite the pleasant income and career for developers of all ages.

It’s advisable for developers to keep tabs on the big corporations or chat with smaller companies to see if combined, an app can be gotten off the ground. A smaller company might just well get national or global attention if they’ve a video game app on par with ‘Twist, Dunk, Lick”.

So get those thinking caps on. The sky’s the limit.